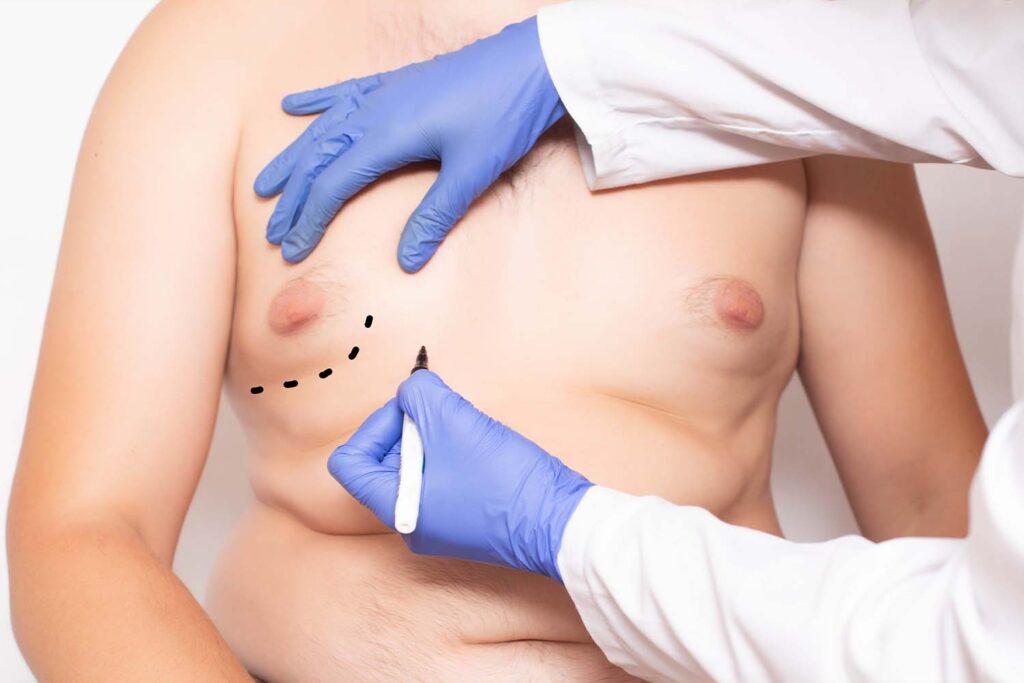 Male Breast Reduction: Everything You Need To Know

If you feel self-conscious while wearing a fitted t-shirt or going shirtless because of excessive breast tissue, you may want to consider a male breast reduction.

Gynecomastia, or enlarged breast tissue in men, is more common than you think. It is the most common breast condition in males, with as many as 50-70% of males being affected in their lifetime.

Gynecomastia is the scientific term for enlarged male breasts, which originates from the Greek words gune, meaning “woman,” and mastos, meaning “breast.” This translates to “man with womanlike breasts.”

Not surprisingly, this condition can often harm self-esteem and be a cause for embarrassment. Many men will avoid activities requiring them to remove their shirts, such as intimacy. Some men even confess to feelings of emasculation.

Gynecomastia is a benign condition of overdeveloped or enlarged breasts in men. It can occur to men of all ages and can be the result of heredity genes, hormonal changes, obesity, certain prescriptions, or recreational drug usage.

Common characteristics of gynecomastia are:

For young adults, the symptoms of gynecomastia are generally caused by unusually high levels of estrogen in the body during puberty. In this case, it’s common for the chest contour to subside naturally and flatten out around the time a man reaches his 20s, but that’s not always the case.

A study conducted by the National Institutes of Health (NIH) suggests that about 50%-60% of adolescent males suffer from gynecomastia.

Gynecomastia, or excessive male breast tissue, is even more common in adult men. The same NIH study estimates that about 65% of men between the ages of 27 and 92 have experienced gynecomastia to some degree.

The symptoms may be similar, but the causes of gynecomastia in adolescents and adults are usually very different. In addition to a hormone imbalance, excessive breast tissue in men can be caused by certain medical conditions, including thyroid problems or cancer of the pituitary gland. It can also be caused by alcohol consumption and recreational drugs like marijuana.

What Is a Male Breast Reduction?

Breast reduction surgery is the most effective treatment for removing the excess fatty and glandular tissue creating the enlarged breasts.

The plastic surgeon will go over a couple of different methods that can be used to perform male breast reduction surgery during your consultation. Once the type of tissue that needs removal has been determined, it typically requires liposuction, direct tissue excision, or a combination of both techniques.

In severe cases of gynecomastia, it may also be necessary to modify the nipple. Extra breast tissue can cause the breasts to sag and stretch the areola or darken the skin around the nipple.

Male Breast Reduction Is on the Rise

Women have been getting plastic surgery for several decades, but it was not always popular among men. If a male did have a cosmetic procedure, it was not usually something he wanted to talk about openly.

The times have changed since the era of social media and selfies, where just about everyone is hyper-focused on their looks. It can also be argued that plastic surgery has lost its stigma over the years, but one thing for sure is that more men are opting for cosmetic procedures.

In general, cosmetic procedures of all types are on the rise in men. Another study by the ASPS reported that more than 1.3 million men had plastic surgery in 2017, which was an overall increase of 30% from the number of men who had surgery in 2000.

Should I Have a Male Breast Reduction?

Exercise and weight loss can help reduce the appearance of male breasts for some men, but sometimes there is excess glandular tissue, which can cause even lean patients to have enlarged breasts.

Male breast reduction is the most consistent and effective treatment for gynecomastia.

The fibrous breast tissue removed during surgery is considered permanent. If a patient experiences significant weight gain, some of the fullness may return. Some rare conditions can cause the recurrence of excess breast tissue.

After surgery, most patients say they feel confident going shirtless for the first time in years and report a newfound self-confidence.

If you’re self-conscious or uncomfortable with how your chest looks, or if you often avoid certain activities that require you to show your chest, male breast reduction is something to consider.

Male breast reduction surgery has some of the highest satisfaction rates, the results are almost immediate, and you’re left with minimal or no visible scarring.

Gynecomastia is most often treated with liposuction. There have been a lot of advances in liposuction technology, which has increased the selection of less invasive techniques.

In most cases, only a small incision on each side of the chest is necessary. Depending on the patient’s needs and technique of the surgeon, incisions may be required along the edge of the areola or armpit area.

Through the incisions, your plastic surgeon will remove excess fat and glandular tissue while sculpting a new chest contour that creates a firm and natural appearance.

The recovery process after liposuction is usually very tolerable. It is recommended to wear a compression garment for the first few weeks after surgery to help minimize the swelling and support the healing tissues.

You should avoid vigorous exercise for about three weeks, but most patients can return to normal activities within a few days after the procedure.

It is imperative to choose a plastic surgeon that has a lot of experience performing liposuction and, more specifically, using this technique for male breast reduction.

When performing tissue excision, the surgeon can remove more glandular tissue and skin that can’t be effectively treated with liposuction alone.

Patients with stretched or sagging skin around the breasts may also need modifications of the nipple, as the extra breast tissue can stretch the areola or darken the skin surrounding the nipple.

The size and location of the incisions will depend on the extent of surgery necessary, but they’re usually located around the edge of the areola or natural creases of the chest, making them virtually invisible.

The recovery process is pretty similar to liposuction, except for a little more soreness and some swelling. Patients should feel ready to return to normal activities within one week of surgery and gradually return to exercise after the first couple of weeks.

Although you may be sore for the first few days, the pain should be minimal. You will likely receive a prescription for pain medication. However, most patients can use over-the-counter medications such as Tylenol.

The recovery process is unique for every patient, but most men are able to return to work within a few days, depending on the nature of their work. Occasionally, men will experience loss of sensation in the treated areas, but this is almost always temporary.

The results from male breast reduction surgery are meant to be permanent, the excess tissue and fat are gone for good.

That being said, it’s still important to maintain a healthy lifestyle. A significant amount of weight gain, steroid use, or certain medical conditions could create a recurrence of gynecomastia. Drugs that alter testosterone levels could also affect your results.

Although gynecomastia or excessive male breast tissue is common, there is no need to suffer if the condition is causing you stress or embarrassment.

In most cases, liposuction is all that’s needed. However, tissue excision surgery for more severe cases still results in minimal or non-existent scarring and a relatively quick recovery period.

Satisfaction rates are very high for male breast reduction. After surgery, you should feel confident wearing any type of t-shirt or even going shirtless by the pool.